Review: A Falsetto of Fury 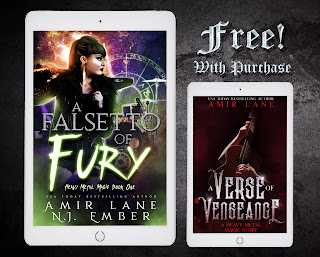 I mentioned in my review of A Verse of Vengeance that I would soon be reviewing this book as they both reside in the same universe.

A Falsetto of Fury is the first book in the Heavy Metal Magic Series written by Amir Lane and N.J. Ember. I have been excited for this series for a while and I was not disappointed. As I'm sure you will garner from my following review I most definitely would suggest this book to just about anyone who will listen to me.

Even better is that if you purchase A Falsetto of Fury you can get A Verse of Vengeance completely free by filling out this form.

A Falsetto of Fury

When Heavy Metal Meets Serious Magic, Get Ready for Some Monstrous Consequences.

Lottie Ferro lives her life by order and rules, but on stage it’s nothing but chaos.
While leading goth metal band The Furies on their first tour of the year, Lottie uses her band’s witchy theme to hide her magic in plain sight. As Lottie struggles to keep their manager, Trenton from sabotaging their careers, she starts to suspect she isn’t the only one who’s hiding something. Trenton discovers her secret and offers her an ultimatum: perform a ritual for him or get shut out of the industry forever. Lottie has no choice but to tell her bandmates the truth. Together, they agree to find a way to give him what he wants.
When the ritual goes wrong, it opens the door to bigger dangers than any of them are prepared for.
From author N.J. Ember and USAT Bestselling Author Amir Lane comes a story of music, magic, and mayhem.
Review
The mere concept of a metal band made up of witches automatically enticed me. A metal band of witches that hides in plain sight by using the concept as a cheap gimmick is even better. And if you think that is great, just wait until I tell you that none of the members have actually told each other that they are witches.
They are not only hiding from the world but from each other and the complete insanity of the situation makes me laugh just to think about. But other than that there are plenty of other great things about the novel.
The world building is phenomenal. The authors did not just make up the fictional band "The Furies", but they made up several fictional metal bands complete with interesting members and all having their own unique sounds or themes. Even bands only mentioned in passing are given enough depth that the reader would feel as if they are real.
This book also included many relatable characters and what's even better is that there are a large selection of characters all with different back stories and personalities. With so many in depth characters it is nearly impossible not to find one that you can connect with. I personally managed to find a connection with The Furies' keyboardist, Brogan.
Concept, world building, and relatable characters aside, this book is over-all well written and easy to read, it is dramatic but also has enough of a comedic edge to not make you feel exhausted after a few chapters.
I am excited to see what the rest of this series will unfold.
Song of the Day:

Kate
Just a random mass of living tissues trying to pass as human.