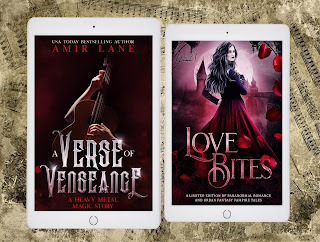 Verse of Vengeance by Amir Lane is a short story that is set within the universe of their Heavy Metal Magic Series that Lane is co-writing with author N.J. Ember.

Verse of Vengeance starts off during WWI and follows the years after. It starts of with two soldiers, Brys and Gwilym, who immediately bond over being Welsh soldiers fighting for the British army. During the war Brys is shot and is on the verge of dying, it turns out that Gwilym is a vampire and ends up turning Brys. This is a decision that ways heavily on Gwilym, as vampirism is not something he would ever wish upon anyone, especially not someone he loves.

After the war the two men settle into the closest thing to a normal life that a vampire can achieve, unfortunately that life includes constantly being on the move, not wanting to stay anywhere long enough for people to become suspicious.

Everything comes crashing down when one night the two men are out for a walk and are ambushed by vampire hunters. Gwilym is taken down and Brys barely gets out alive before sunrise.

Heartbroken and Angry, Brys does the only thing he can, he takes his revenge on those who have caused him hurt, whether it be directly or as a member of a particular social class.

Hopefully you don't want a professional review because my opening statement is "This book made me cry." Reading this was definitely a bit of a rollercoaster of emotions. This was one of those stories that you come out of still feeling raw, as if your whole world just turned upside down.

I'm not sure I am still over the plot twists of this book, they were so perfectly orchestrated that even though they were foreshadowed it still hit me like a train. I can distinctly remember going through a phase of denial over the events in this book. I'm pretty sure I went through the whole cycle of grieving, possibly more than once.

Other than the emotional side of this story I should probably mention that the writing is phenomenal and that, as always, Amir Lane has been sure to research the stories setting, both time and place. I can genuinely say that I really hope for a follow up of this side story because I am not yet over the main character.

I would suggest this to anyone that likes vampire stories, historical fiction, or romantic tragedies.

Today's Song of the Day:

Kate
Just a random mass of living tissues trying to pass as human.